A moving choral work – the finest art form in the world

I have been singing in choirs since I was a little girl. Already in the choir of Kari Ala-Pöllänen’s music classes some movement was added to music. Kari’s skilled, inspiring and warm-hearted guidance gave rise to my love for choir singing.  It also made me realize that it is good to watch a music performance from several perspectives and to bring down stuck boundaries. Choir lecterns, gowns and files may have their places somewhere but not in my work. Folk music education and studies in Norway and Sweden widened my world of tones and rhythms, and my path as a composer began with Suden aika (Time of the Wolf). Marjukka Riihimäki introduced me to choreographer-director Päivi Järvinen with whom I still work together. Our respect for each other is only growing. Tune – motion – rhythm – space – story, all of them intertwined, working wonders: the whole body resonates, the mind quiets down and a person is deeply moved from the bottom of their heart.

1996 Suden aika – minun satuni / Time of the Wolf – My Fairy Tale (Sulasol, Philomela in the picture)

In the beginning of the 1980’s, I started my journey to the world of Kalevala-meter poetry and singing. My attraction to traditional singing and Kalevala’s poetical language deepened into love. Furthermore, in the 1990’s I got interested in old archetypal fairy tales and it was time to combine these two interests and create a song that has elements of sung poetry and fairy tales.  I made the solo album Tellu: Suden aika (Time of the Wolf). It has had its longest life in the world of choirs. Philomela choir led by Marjukka Riihimäki, Counselor of Music, has been performing Suden aika (Time of the Wolf) over twenty years with a brilliant choreography by choreographer-director Päivi Järvinen. The piece celebrated its 20th anniversary with festive shows in 2019 and it is still alive and running. Duration c. 40 min. 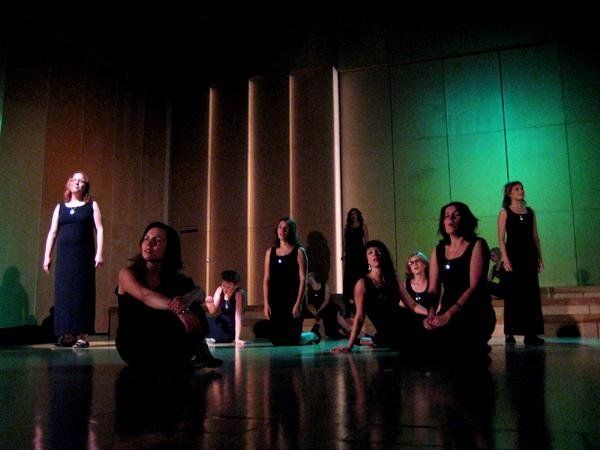 1999 Enkelit / Angels (commissioned by Fiori ensemble, Philomela in the picture)

Enkelit (Angels) is a Kalevala-meter story of a woman that loses her child. After a year has passed, she starts to hear crying from the cellar. While going down to the cellar, she must face her worst fears. Enkelit (Angels) is a fierce journey deep into sorrow and back. Fiori ensemble from Jyväskylä recorded this song, which they commissioned in 2000. The quartet Suden aika (Time of the Wolf) (Liisa Matveinen, Tellu Turkka, Katariina Airas, Nora Vaura) performed Enkelit (Angels) for several years and recorded their version of the song, which was included in the CD Etsijä (Seeker) in 2006. The choreography and direction of Philomela’s version of Enkelit (Angels) was created and carried through by Päivi Järvinen. Duration c. 25 min. 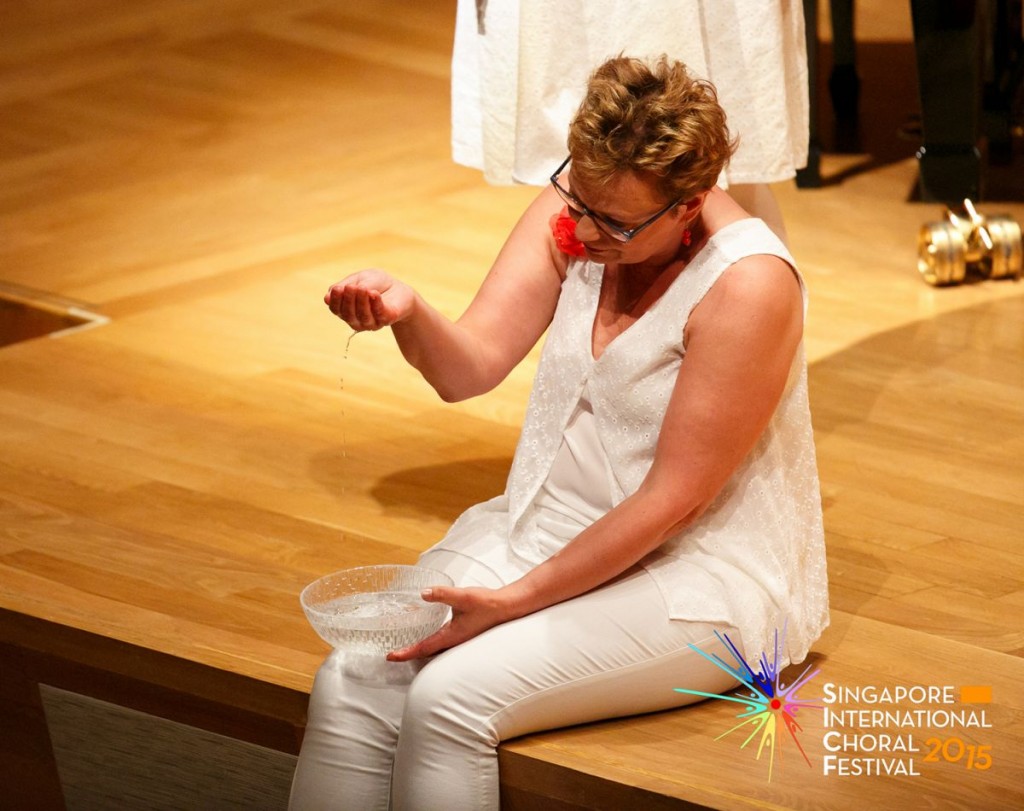 2001 Minne kauneus katosi? / Where Did the Beauty Fade? (Sulasol, commissioned by Philomela choir, Sari Salmikivi from Philomela in the picture)

This piece, in which harsh hideousness and delicate beauty are united, deals with the theme of getting old in a world of narrow beauty standards. Philomela’s strong choreography by Päivi Järvinen doesn’t leave anyone cold. 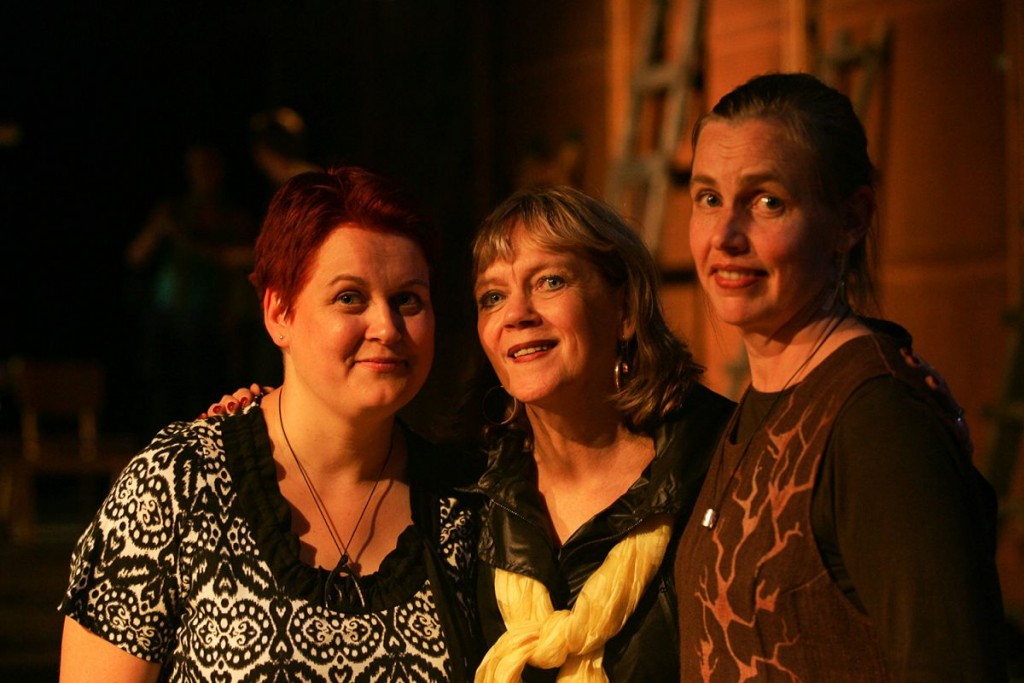 (In the picture: me, Marjukka and Päivi performing in the premiere of Kädetön neito (The Handless Maiden) in Tampereen Sävel, in 2009)

Etsijä (Seeker) tells about that moment in one’s life in which nothing else but the truth works. One must finally see themselves thoroughly, including the beauty hidden behind the shameful self-loath. Suden aika (Time of the Wolf) recorded this piece for the CD Etsijä (Seeker). Philomela made its own version choreographed by Päivi Järvinen. Duration c. 10 min.

”Home towards the womb”, commented a friend in a silence retreat. I thought it was so well and beautifully put that I decided to make a song about it. The song did not quite reach the finish line even if Philomela performed it and Suden aika (Time of the Wolf) recorded it on the CD Unta (Dream). Maybe I will still explore it through and try to walk it home. (In the summer 2015 the female choir KLONK of Klementtiopisto got quite close! Not the easiest song…) 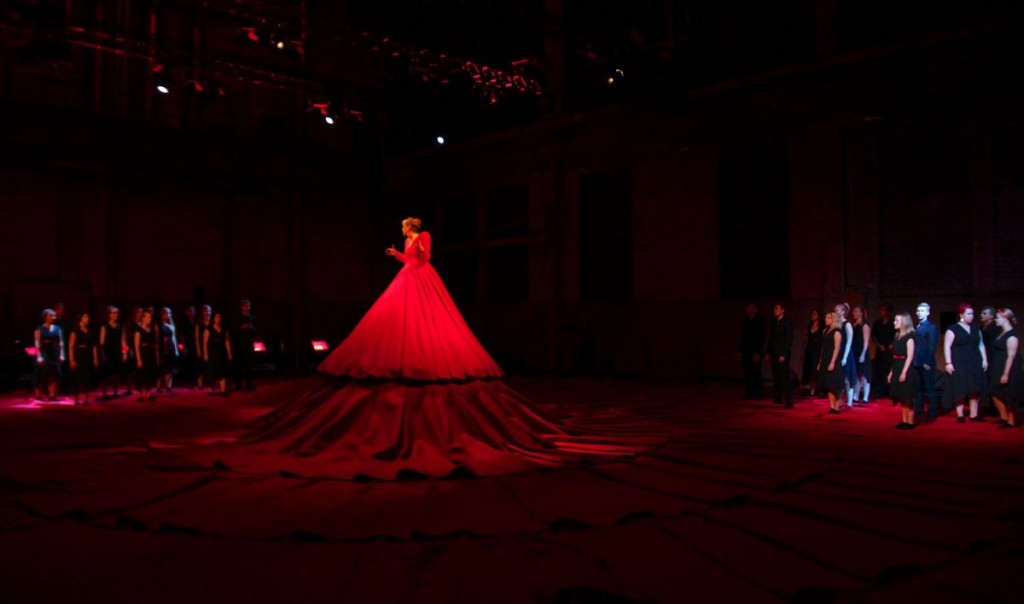 This piece is about a fisherman who catches the skeleton of a woman.  The man gets scared and runs away – still carrying his fishing pole – and the skeleton gets dragged behind him. Finally, the fisherman gets home, calms down and starts to examine the skeleton. It’s a female skeleton. Wonder what has happened to it? At night, when the man is sleeping, the skeleton gets up standing on its shaky feet. It takes the man’s heart in her hands and starts drumming it and sings: Meat, meat, more meat! As a result, the skeleton gets meat around its bones, skin on top of that, eyes, hair and wow! A beautiful woman returns the heart back to the man’s chest and lies down to sleep next to him. The next morning two beautiful living creatures wake up intertwined…

I wrote this originally Icelandic story in Kalevala-meter and placed it in the Finnish landscape. At first, I was told that there was too much text for listeners to follow. Then I modified some barbies and built a melon boat with my daughter, and one autumn day – with help of few friends – I shot some still pictures in Kauppi forest and on the shore of lake Näsijärvi. The result was projected on screen above the choir. And voila, it was so easy for people to follow the story! (In the lower picture: the lovely Apricus, the choir of the Tampere Steiner school’s parents that I led for the school year 2013–2014)

2008 Yökulkijan lauluja / Songs of a Night Wanderer -series for a mixed choir and a folk music ensemble based on poems by Johanna Westersund (commissioned by Cantabile choir, Sulasol)

Yökulkijan lauluja (Songs of a Night Wanderer) paints a picture of the moods and sensations of a night owl through different seasons of a year. In Maaliskuu (March) the wanderer – wrapped in a warm ice fishing coverall – takes their time under the apple tree admiring the scenery painted by the full moon. Under the Iso Karhu (Big Bear) constellation the wanderer stops on the bank of the autumnal field and sinks into the arms of the fragrant soil that is just about to lie down and rest for the winter. Iltapilvien alla (Under the evening clouds) paints a picture of a dip into water soft as silk on a summer night. This series of songs was originally made for a mixed choir and a folk music ensemble. It had its premiere performed by Cantabile led by Rut Kiiski. There is also a female choir version of it available and that one is performed by Tellus from Tampere. 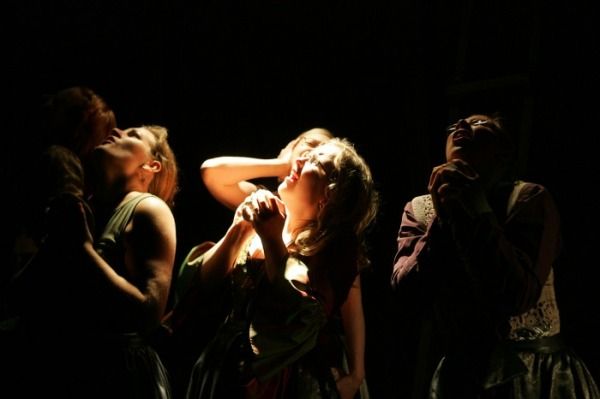 Kädetön neito (The Handless Maiden) is originally an old Indo-European fairytale that has different versions over the world. The protagonist of the story is a girl who is tormented by an old contract with the Devil, who wants what belongs to him. Even if she has no hands. The story is about a struggle between light and darkness, about escape, discovery, torment and happiness. It allows the listener to follow the protagonist on her eventful journey going through monotony of routines, shine of stardust, and gloomy horror. Kädetön neito (The Handless Maiden) is a combination created by sound, movement, shadow, space and light and it is performed entirely without words. The work method here was an improvisation by the group through which the musical and visual world of the piece was created. What is new about this piece, in addition to the creation process, is the outcome in which different elements combine to form a comprehensive experience.

2011 Suojaavat siipes, Jeesus / Your Protective Wings, Jesus, 7 arrangements to old hymns (Commissioned by Herättäjä-Yhdistys, an association of a revivalist movement)

Working on this piece I cooperated with my old ensemble Suden aika (Time of the Wolf) and together we created a record full of Hymns of Zion arranged to a vocal group and folk instruments. This project was actually commissioned by relatives of Liisa Matveinen, me and Katariina Airas and the initial idea of it was born years before the project was fully actualized. I had already arranged one of the hymns, Iltavirsi (Evening Hymn) to my beloved grandmother as a birthday present when she turned 85. Suden aika (Time of the Wolf) still performs this material and makes also new arrangements.

Saima Harmaja is one of the most beloved poets of Finland, very dear to me too. Two songs; Rannalla (On the Beach) and Huhtikuinen aamu (An April Morning) were commissioned by Klemettiopiston Naiskuoro (The Women’s Choir of Klemettiopisto). In these pieces, I practised a new fast croque technique, in which the songs are painted with fast pushes and the performer has a lot of room left for variation and improvisation. Lähde (Spring), Rajalla (On the Border) and Unen silta (The Bridge of a Dream) were created for me. They were part of my repertory together with Timo Alakotila.

This is a wild and sad story from northern Finland, where Laestadianism (a revivalist movement) in the worst case manifests itself as a hypocrisy and as a will to judge. This story was given to me by a woman who is one of the two girls of this story.

A young girl falls in love, lives with a man and has two children. In the end the man leaves her and marries another woman. The villagers whisper: ”Such a worthless woman,  has children without a husband, without the blessing of a priest.” Anna is left as single mother of two. After a year she meets a lovely man, and everything seem to be working out. After the wedding the mother in law orders Anna to give her bastard children away. Anna begs her husband to defend her and the girls. The man, between two women, wants to avoid conflict and says: Have one, give the other away. Consequently, Anna had to choose which one of her daughters stays and which one leaves to live in another family on the other side of the lake. She carries her younger daughter on her back and the villagers whisper: ”Such a worthless woman, abandons her child…” 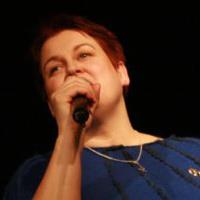